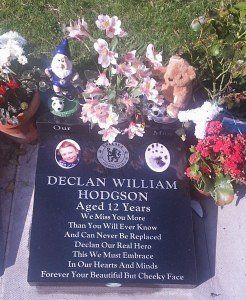 Declan’s funeral took place at Barnsley Crematorium at 2.30pm on the 26th June 2013. Over 200 people attended the service and the we took great comfort in seeing just how popular Declan had been. Thank you so much to all those who attended.

Declan was a car fanatic from an early age and because of this we chose a custom coffin design using photographs of his Grandad’s Porsche 911. That same Porsche took part in the funeral procession to the crematorium where Declan received a fantastic guard of honour from Porsche owners who are friends of the family. It was a truly emotional spectacle and one that we will never forget.

The service was a sad and emotional affair. Special credit goes to Declan’s father for a fantastic speech and video montage and to Declan’s brother Finlay for writing a special letter. At the bottom of this page are the Order of Service and Video Montage available to view.

Declan’s ashes were laid to rest at a private ceremony in Wombwell Cemetery on 5th July 2013.

In closing, we’d just like to add that superheroes are fictional characters who save lives using their special powers. Declan didn’t have any special powers but we like to remember him as a real life superhero. In his death we are proud to say he saved the lives of 3 other people. His liver, kidneys and pancreas have all lived on, giving these people the gift of life.

“A lady in her late 40’s received a kidney/pancreas transplant. She has suffered from Diabetes and has had so many terrible health problems from this condition. She had been on the transplant waiting list for over 4 years and she was just about to start dialysis, something which she had dreaded for a long time. For various reasons, this lady’s doctor’s had warned her that she may never get her transplant and to expect the worst so this lady is so grateful for what you and Declan have given her. This lady is still in hospital and, although she had some initial complications, she is now doing well. She has a partner and her parents to support her through her recovery.”

“A lady in her 20’s received a kidney transplant as a result of Declan’s donation. She had been on the transplant waiting list for nearly 3 years. The cause of her kidney failure is unknown. Although this lady’s new kidney has been slow to start functioning, something which is not uncommon, she is now heading in the right direction and making good progress. She is married and she can now start to live the life that Declan has given her back.”

“A teenage boy who was gravely ill received a liver transplant. He was diagnosed at a young age with an enzyme deficiency and received his first liver transplant when he was one. He had lived his life for a few years with no major health issues but then his livers function worsened. He was put back on the transplant waiting list at the end of 2011. From this point, his health started to deteriorate rapidly and his parents had given up all hope until last week. I spoke with his transplant nurse on Tuesday and he was pestering the nurses on the ward to get him out of bed so he could go for a walk. This young man and his family have asked that I pass on their heartfelt thanks to you all and they are thinking of you.”