On the 12th June 2013 Declan underwent his final surgery. At 8am he was taken down from Ward 12 at Leeds General Infirmary smiling and happy to be getting sorted out. He was looking forward to being able to play out again like a normal boy. He went to sleep peacefully without any distress, mumbling about the tasting of burgers. (Apparently the anaesthetic gives you a flavour of onions in your mouth)

Shortly into the surgery Declan suffered an unavoidable but very serious bleed. The surgical team responded quickly, stopping the blood loss. However there was a period of a few minutes where his brain could have been starved of oxygen. The surgeons completed the surgery as planned in just over twelve hours but afterwards gave us the terrifying news that they had serious concerns over the health of his brain. Declan never regained consciousness that night and was suspected brain dead at 4.30am on the 13th June 2013 by the on duty consultant. 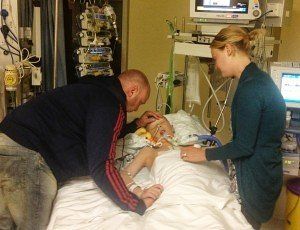 We were asked the question about organ donation and very quickly made the decision to agree to the request. It would have been wrong of us to accept a heart transplant for Declan later in his life without offering the same gift to others.

We were introduced to Sarah Whittingham, who was a specialist transplant nurse. She was responsible for matching Declan up to recipients and attending to Declan until the whole donation process was completed and he was taken to the Chapel of Rest. She showed total commitment to supporting the whole family during that traumatic day. We didn’t realise how complicated the organ donation process was and were a little overwhelmed by it all. Needless to say it is not just a case of saying “that boy needs a liver, give him this one”.

At 11.45am 13th June 2013 Declan was confirmed dead after undergoing a brain stem death test. At this point the transplant service could start their work. They found three compatible recipients for Declan’s organs and put four surgery teams on standby. It took until just before midnight before everything was ready to go. Declan was taken back down to theatre, handed over to the transplant team and we said our final goodbyes to our much loved son, brother, grandson, nephew, cousin and friend.